Over the past 30 years the central banks’ “carry regime” has supported the markets.  That may no longer be possible if inflation is coming home.

Inflation is back. The question is whether it has come to visit for the weekend or has arrived with all its possession in a van and is moving into the back room. A lot hinges on the answer. For this particular guest has very different tastes to those of the central bank architects who have designed our economic homes.

Over the past 30 years central banks have diligently kept us dry by swiftly plugging any leaks which have appeared due to passing market storms. Their service has been impeccable. But can such levels of service continue if inflation is here to stay?

For the service which central banks have provided over the last few decades has been predicated on inflation being absent. In particular, it has implicitly aided and abetted the growth of one part of the capitalist economy: the carry trade. In the process of promoting its benefits and avoiding its costs, they have themselves become the greatest carry traders of them all. The carry trade thrives in a low inflation world. As I said, a lot hinges on whether inflation is coming home.

A recent book, “The rise of Carry”[1] makes a convincing case that we should worry about inflation as the catalyst of the end of the “carry regime”, the term the authors use to describe the world orchestrated by central banks since the mid-1990s.

If we accept such a definition, we can see that carry trades are everywhere, not just in the currency markets. The whole private equity industry, Leveraged buy-outs, the glut of share-buy backs which has seen corporate debt rise substantially over the last decade, selling derivatives, banking and insurance model: all rely on lots of debt and the belief that the future will be bump free. In fact, if you just look down your street, any householder who has bought his house with a mortgage is doing a form of carry trade. They have used lots of debt to buy a house, trusting there will not be property crash coming soon.

The pattern of returns from a carry trade are saw-toothed. You get a steady upward slope of returns followed by large one-off losses. The reason why carry trade profits cannot carry on forever is that their success pulls in ever more capital, which depresses the “carry”, or the difference between the cost of funding and the return you get on the asset you have purchased. At that point – especially if you get a little nudge from rising interest rates – you get a nasty tumble as everyone scrambles to get out, all selling at the same time to cover a rising interest bill.

It is tempting to take a dim view of such trades, but they are the beating heart of any capitalist economy. Without such carry trades, liquidity would reduce to a trickle and the arteries the world economy would gum up. But it is when carry trades become a carry regime that we have a problem.

The start of the carry regime is debated. Did it start when the Fed did all it could to support markets after the 1987 market crash, or a decade later when central banks intervened after the unravelling of classic carry bubble during the Asian Crisis of 1998? What is not in doubt is that through repeatedly stepping in to support markets and saving investors from the worst effect of carry crashes, central bankers have, unwittingly, become the biggest carry traders of all. Central bank balance sheets are the largest geared bets on low future volatility in the world.

Fed Balance Sheet at Record High
US Federal reserve balance sheet as a percentage of US GDP, 1990-2021 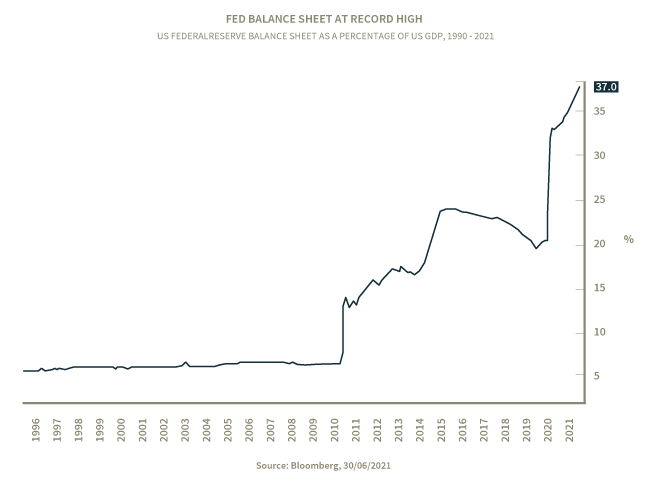 As such, they are particularly sensitive to any signs of volatility, both on their own behalf and on that of market players whose carry trades – with associated debts – have prospered in the low volatility world central banks have done their best to ensure.

That central banks have been able to focus on volatility as its prime concern is due to the death of inflation. But what if inflation makes a come-back? Well it has. Given what is at stake it is not surprising that the first response is denial. Central banks across the world are singing off the same hymn sheet in declaring the recent spurt of inflation is temporary. It may well be. The short-term pressures of a world-wide economy rapidly cranking up to capacity has put great strain on factories and supply chains limbering back up to life. That is indeed temporary. But what of the effects of the strongest growth in money supply in decades? 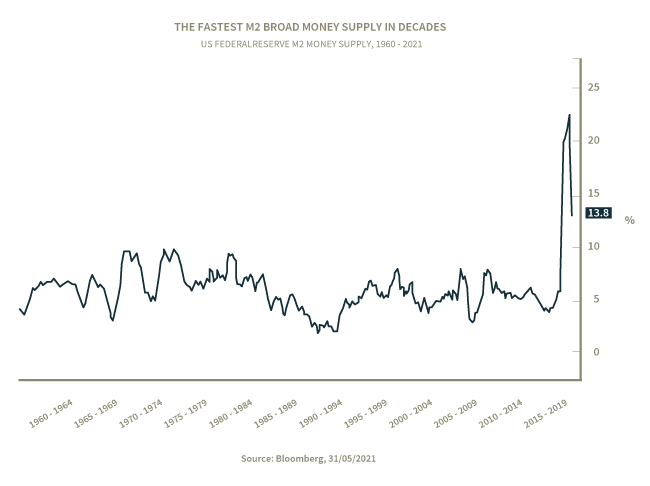 Will that have no lasting effect? What of the longer-term impact of the global shrinking pool of labour caused by the twin impacts of ageing and falling fertility, so well described in a recent book?[2]

There are credible arguments on both sides of the inflation debate. What is not in doubt is the significance of such a return of inflation. For it would spell the end the global carry regime. After denial would come reluctant acceptance of the need to wage war once again on inflation. That involves higher rates and cutting back on liquidity, the exact opposite of what allows carry trades to thrive.

Over time carry trades seed their own demise by attracting too much capital and snuffing out the difference in interest between the cost of funding and the yield on the asset bought.  It is the same with a carry regime. Even central banks cannot keep it alive indefinitely if the higher rates needed to snuff out inflation also extinguish the carry.

Over the coming years a lot will depend on who is right on the great inflation debate.

The information contained in this document is provided for use by investment professionals and is not for onward distribution to, or to be relied upon by, retail investors. No guarantee, warranty or representation (express or implied) is given as to the document’s accuracy or completeness. The views expressed in this document are those of the fund manager at the time of publication and should not be taken as advice, a forecast or a recommendation to buy or sell securities. These views are subject to change at any time without notice. This document is issued for information only by Canada Life Asset Management. This document does not constitute a direct offer to anyone, or a solicitation by anyone, to subscribe for shares or buy units in fund(s). Subscription for shares and buying units in the fund(s) must only be made on the basis of the latest Prospectus and the Key Investor Information Document (KIID) available at https://www.canadalifeassetmanagement.co.uk/

[1] The Rise of Carry by Tim Lee, Jamie Lee and Kevin Coldiron

[2] The Great Demographic Reversal by Charles Goodhart and Manoj Pradhan